Busiest Ports In The World

Every day containers of consumer goods are stacked by the thousands onto cargo freighters and transported from port to port across the globe. The volume of cargo traded through the world’s top container ports has increased dramatically over the years. A major reason for this is the increase in globalization throughout the world. Many of these ports work towards being one of the busiest ports in the world.

The changes in distribution and cargo-handling capabilities of the world’s biggest container ports show the shifts that the world economy has undergone over time. Container ships make about 9,000 port calls.

Workers at ports worldwide load and unload more than 10,000 liner ship stops per week. The average ship makes about 2 port calls per week.

There are different factors that determine how busy or large a port is. Some components are the area covered by the port, amount of traffic handled, and the role each port plays in the import and export capabilities of the nations they serve.

Many countries are gearing up to meet the additional demand for import/export. This method of transport accounts for more than 90 percent of the world trade by volume. New and bigger terminals are built with expansions of channels and waterways in order to prepare for this.

Read our list of the busiest ports in the world below. 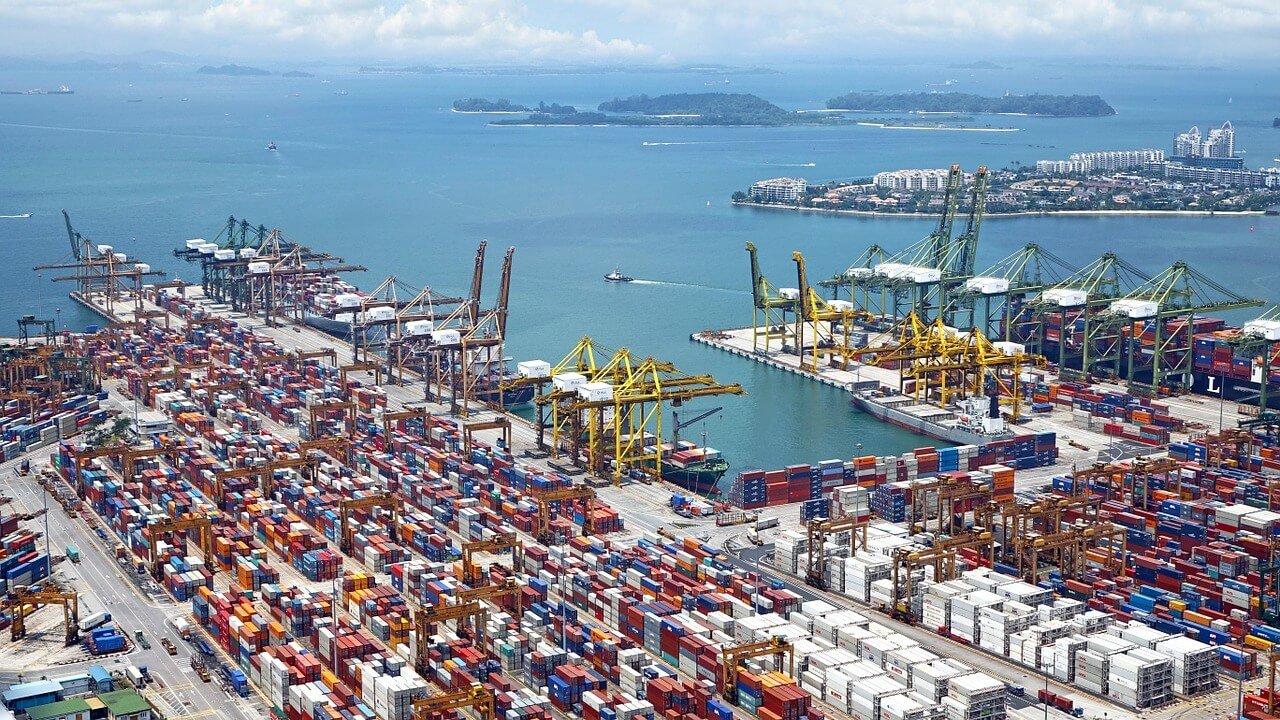 Countries are eager to boast having the largest or busiest port in the world because it signifies their economic growth and power. With this power it indicates their presence in the global market.

Busiest Ports in the World

The following are among the busiest ports worldwide:

The port of Shanghai is one of the most important gateways for foreign trade for China. It has been one of the world’s most active international trade hubs for over a century. This is still the busiest in the world today in terms of cargo tonnage.

Shanghai’s port has many economic advantages such as ideal natural conditions, great geographical location as it faces the East China Sea, perfect inland distribution infrastructure, and it serves a vast economically developed area.

The Port of Singapore is the second largest port in the world. It handles more than 420 million tons of cargo every year.

The port terminals are located at Tanjong Pagar, Keppel, Brani, Pasir Panjang, Sembawang and Jurong. On average, Singapore’s port receives 140,000 vessels on an annual basis and connects Singapore to more than 600 global ports.

The port of Singapore transships a fifth of the world’s shipping containers and half of the world’s annual supply of crude oil. Singapore was one of the few who recognized the opportunities to establish ports for commercial trading.

The Hong Kong Port is the key factor in the development of Hong Kong. It is located in the Far East Trade Routes and is in the center of the fast-developing Asia-Pacific Basin.

Hong Kong Port provides good access for vessels from all over the world. One of the unique qualities of the port is that it efficiently handles cargo operations. The locations of the major cargo handling facilities, including container terminals, river trade terminal, mid-stream sites, public cargo working areas and supporting facilities, such as ship repair yards and typhoon shelters.

Like many of the world’s largest and busiest ports, Hong Kong in the South China Sea is a natural harbor and accounts for the cities strong presence in the world market.

Port of Rotterdam in the Netherlands is one of the oldest and largest seaports in Europe and it also ranked as one of the biggest marine ports in the world. It is the only port in north-western Europe that offers unrestricted access to ships with the deepest draughts.

The port handled 441.5 million tons of cargo in 2012, is a gateway to a market of more than 500 million European consumers and also is Europe’s largest center for agricultural business. The harbor functions as a crucial transit point for transport of goods between Europe and other parts of the globe.

Port of Tianjin (formerly Tanggu) is the biggest and fastest-growing part of the city’s economy. In 2012, the Port of Tianjin’s cargo throughput reached a new record, growing 5.3 percent year-on-year to 476 million tonnes.

Located in the mouth of the Haihe River in northern China, the port connects to more than 500 ports and serves 189 countries. It is expected to handle 560 million tons of cargo in 2015.

Exporting to the Busiest Ports in the World

Schumacher Cargo Logistics can move your household goods and vehicles all over the world. Since 1977, we have shipped to the busiest ports in the world and offer the best rates and services. To start your shipment, fill out our Online Quote Form today!