Closing out the holiday season is New Year’s Eve. The whole world celebrates the ending of the old year and the beginning of the new year together, despite the diverse array of holidays that came just a few weeks earlier. When the clock strikes midnight on December 31, the world celebrates in anticipation of what the new year will bring. Check out some of the interesting New Year’s Eve traditions around the world.

The world doesn’t celebrate all at once because, well, time zones. The first countries to celebrate the new year are Samoa, Tonga, and the small island of Kiritimati (Christmas Island), which is part of Kiribati. The last countries to celebrate the new year are American Samoa and Baker Island, part of the United States. While Samoa and American Samoa are only about 100 miles apart, they are 25 hours apart timewise. When it is 12 p.m. local time in American Samoa, it is 1 p.m. of the next day in Samoa, local time. 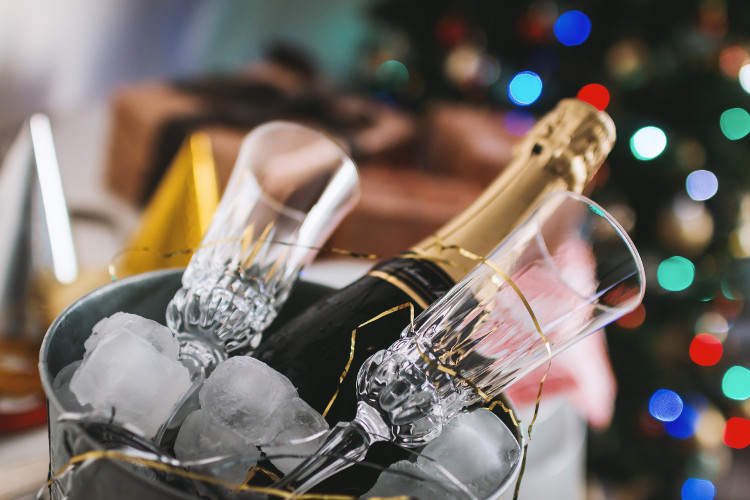 Typically in the United States, New Year’s traditions include crowds gathering to watch the famous Times Square Ball drop, whether right in the heart of New York City or on television in the comfort of home. When the clock strikes midnight, couples kiss to ensure another year of love, and communities send fireworks into the sky in celebration.

This holiday is celebrated across the world, so each country has its own customs for ringing in the new year. Check out how these 10 countries celebrate New Year’s Eve.

The Spanish New Year’s Eve tradition is to eat 12 green grapes at the stroke of midnight. The grapes are eaten at each dong of the bell, one at a time. Las doce uvas de la suerte (“the 12 lucky grapes”) each symbolize the months of the year, and they are supposed to bring good luck.

The Danish don’t fret if a plate chips during the year. They save these for New Year’s Eve to then smash against the homes of friends and family to banish bad spirits. When Demark celebrates their New Year you can guarantee it’ll be a smash.

In this Nordic country, people predict what the upcoming year will look like by casting molten tin into a small container of water. Whatever shape the tin takes when it hardens is what the new year will bring. Shapes resembling a heart or ring mean a wedding, a ship predicts lots of traveling, and a pig means there will be plenty of food available.

During the New Year’s Eve celebration of Hogmanay, the Scottish practice “first-footing.” The first person to cross the threshold of a home in the new year is to carry with them a gift for good luck.

Traditionally, an onion hangs on the front door of homes on New Year’s Eve as a symbol of rebirth. The next morning on New Year’s Day, parents will wake their children by tapping them on the head with an onion.

For those with a never-ending taste for adventure, Colombians will carry an empty suitcase around the block at midnight in hopes of a travel-filled new year. Hopefully the next year, they have a suitcase full of clothes.

In Ecuador, they celebrate the New Year by burning paper-filled scarecrows and and photographs from the last year at midnight. This tradition brings in good fortune by scaring off bad spirits.

In Brazil, you need to consider your entire outfit for the evening. Whatever color your underwear is symbolizes what the new year will bring. Popular colors are red (love), yellow (money), green (luck), and white (peace).

In the Philippines, it’s not just a random occurrence for the confetti to be in the shape of a circle. Round shapes represent coins, symbolizing prosperity for the next year. People will wear polka dots and eat round fruits at midnight. The Philippines keep their New Year’s traditions round to make the most money they can for the next year.

In alignment with Buddhist beliefs, the new year is literally rung in through ringing bells in the temples 108 times. This number represents human desires and suffering, and ringing a bell 108 times cleanses oneself.

Some countries have a completely different New Years entirely. China’s New Year’s Eve traditions comes during the beginning of the lunar calendar and is a 15 day celebration with many people off the entire time.

Russia’s New Year Eve tradition is to make a wish in their drinks. To start this tradition, they write their wishes on a piece of paper then light it on fire. Let the ashes fall into their drinks and you consume it with the ashes to make the wishes come true.

The Czech Republic’s New Year Eve tradition resolves around apples. They’ll all have apples ready to split in half on the New Year, with the shape inside showing what type of future year will happen.

Thinking about cleaning your slate and starting the new year in a new country? Contact the moving specialists today to get a free quote for household goods shipping. From all of us here at Schumacher Cargo Logistics, we wish you a happy new year!