The first wave-powered boat- the story of Kenichi Horie

Is solar energy the new way of creating energy for boats and ships?

I was recently in San Francisco and found out an amazing story about the very brave and enigmatic sailor Kenichi Horie.

In 1962 at the age of 23 he became the first person to… make a solo crossing of the pacific ocean in a 19 foot man-powered boat called the Mermaid.

He left Nishinomiya Japan on May 12, and in 94 days (on August 11) he arrived in San Francisco, California, U.S.A. He encountered 50-foot waves and thought for the most time that he would die before reaching safety.

When he finally arrived with no passport or money and was promptly arrested by the mayor of the city. After learning of his voyage the mayor freed him and gave him a 30 day visa and was awarded the key to the city. He became an instant hero in the global boating community and his boat is on display at fisherman’s wharf in SFO.
Since then, Horie has made numerous solo voyages:

In 1996, Horie sailed from Salinas, Ecuador to Tokyo in a solar boat made of recycled aluminum. This crossing covered 10,000 miles (16,000 km) in 148 days which earned the Guinness World Record for the fastest ever crossing of the Pacific in a solar-powered boat.

In 1999, he sailed from San Francisco to Japan aboard a boat made primarily from recycled materials. The boat was a 32.8-foot (10.0 m) long, 17.4-foot (5.3 m) wide, catamaran constructed from 528 beer kegs welded end-to-end in 5 rows (Horie joked that 500 of them were empty) The rigging consisted of two side-by-side masts with junk rig sails made from recycled plastic bottles. This boat is on display in Okura Beach, Akashi.

In 2002, Horie sailed from Nishinomiya to San Francisco aboard the Mermaid III, which was a replica of the original Mermaid constructed from a variety of recycled materials, including whiskey barrels for the hull, aluminum cans for the mast and plastic soda bottles for the sails.

Now at the tender age of 74 he is still an active sailor who single handedly changed the thought process on getting from A to B ! 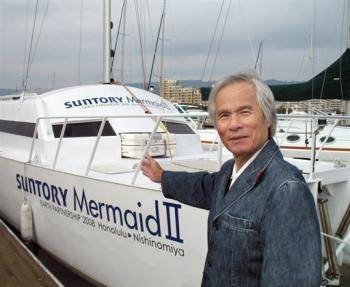 In May 2012,  the MS Tûranor Planet Solar- the world’s largest ship completed its first solar-powered tour of the world.

In today’s eco-friendly environment, Kenichi Horie’s invention opens up a new world of possibilities.  Fuel is becoming a thing of the past and battery operated  boats, yachts and ships are beginning to give way to solar-powered boats, yachts and ships- using Mother Nature’s natural resources to create energy.

What is your opinion about using solar-powered boats? Wave of the future or not?