How the Panama Canal Changed the World 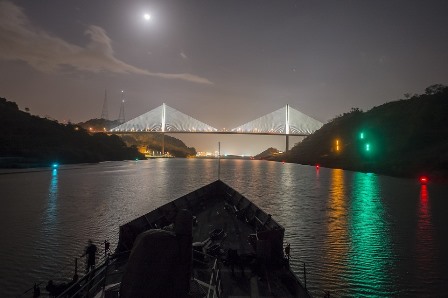 You’d be hard pressed to find someone in this great big world who’s never heard of the Panama Canal–unless you’re asking indigenous tribes of the deep Amazon or uncharted Pacific Islands. The creation of the canal in 1914 marked not just a major geological and engineering feat but a huge international and economic event as well, ushering in our modern industrialized age of global politics. Let’s take a look at just why the Panama Canal changed the world.

And if you’re looking to ship your own boat overseas don’t worry, you won’t have to dig your own canal or brave Cape Horn; Schumacher Cargo can assist with all your shipping needs.

Before the canal was built, ships would have to sail all the way around Cape Horn, the southern tip of South America, a long and precarious journey full of strong winds and cold waters that was a nightmare for many captains. But what if you could somehow cut across Central America and skirt South America all together?  Well, then you’d have a much, much shorter and safer trip.

Panama offered the shortest land gap between the Pacific Ocean and the Atlantic Ocean, just 60 miles of relatively flat land in an otherwise mountainous terrain (the area is only 100 meters above sea level). The French first tried to dredge out a canal in the late 1800s but failed, although their excavation paved the way for the American engineers who followed after.

The Panama Canal project came to the Americans by the insistence of Theodore Roosevelt, who believed–as almost all presidents after him–that the Canal was a vital strategic point for America to control. However, the area for the canal was part of Columbia and they failed to ratify a deal giving the Americans access. Still hungry for the canal, Roosevelt convinced the Panamanian locals to revolt against Columbia with US backing. Panama won its independence and Roosevelt won the Canal; but this would not mean Panama didn’t suffer the consequences of subsequent poverty and poor labor conditions in years to come.

The Power of the Canal:

The idea of the Panama Canal as a strategic asset has not been lost among the US, nor any other country. Controlling the world’s most trafficked waterway supplies a bounty of power and the US has fought vigorously to maintain such control, utilizing covert economic strategies and CIA methods to ensure that the US did not lose control to either the Panamanians or any other country–tactics that were then used in other Latin American countries, Africa and the Middle East. Other countries have since adopted those tactics, even using them on the US.

In 1999 President Carter handed majority control of the Canal back into Panamanian hands. And now the Chinese have taken an interest in the Canal and have even drawn up plans for a Nicaragua Canal; the tides of power are turning. And so the Canal remains a vital part of international politics even in a world of flight, satellites and the internet.