A Brief History of the Port of Houston Texas 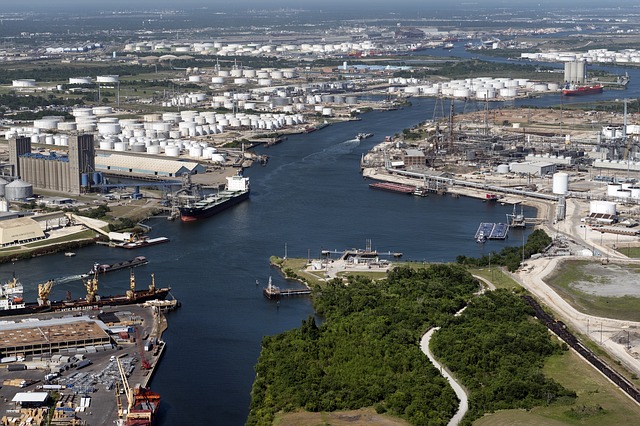 The inland Port of Houston lies on the Texas Gulf of Mexico coast. This is linked to the Gulf at the Port of Galveston by the Gulf Intracoastal Waterway and the Houston Ship Channel.

For a short while, it was the capital of The Republic of Texas. Currently it is the tenth largest port in the world. Although it’s the only the fifth largest in the US, it ranks first in United States international commerce.

It is the main port for the State of Texas and a major center for worldwide petrochemical and oil industries, as well as for biomedical and aerospace research and development.

It would make sense that many expats live and work in the area from the above mentioned industries and we have helped many relocate here and move from Houston.

Companies Near the Port of Houston

In 2008, Houston ranked 2nd on the Fortune 500 Company Headquarters list. Then in the same year, ranked both 1st on Forbes list for ‘Best Cities to Buy a Home‘ and for ‘Best Cities for College Graduates‘.

Today the Port of Houston is called the energy capital of the world as several major energy organizations have their headquarters there. This list includes Exxon-Mobil, BP, Shell Oil, Chevron Pipeline Company, Apache Corporation, Marathon Oil Corporation and Citgo.

Conocophillips have their international headquarters there and it comes as no surprise that the Port is a center for the construction of petrochemical and oilfield equipment. In April 2008 it had the lowest unemployment rate in the world at 3.8%.

Schumacher Cargo Logistics also has a main office situated near the port of Houston. Being near the port allows us to easily bring international shipments all around the world from the US.

The Port of Houston History in the Early Days

In the early days, barges carried goods along a winding long distance route to the Gulf of Mexico.

In Galveston, the barges met up with seagoing vessels that carried goods to and from the rest of the U.S. and overseas. As cargo volumes grew with the city, the lack of a deep water port in Houston caused increasingly more problems.

During the 1890s business and civic leaders continuously lobbied with no avail for a deep water ship channel. This would serve the many international shipping companies who transported cotton and other cargo from Texas.

But it took the dedication of a young congressman, Tom Ball, the discovery of oil, and the fury of Mother Nature to come together before the maritime destiny of Houston was fulfilled.

In September 1900 one of the worst hurricane disasters in the history of America hit Galveston. Notably more than 8,000 people died in these storms.

Petitions for a protected port miles upstream from the exposed position in Galveston then took on greater urgency. In 1901 oil discovered at Spindletop accelerated the growth of commerce in Texas .

With rice starting to rival cotton exports the lack of a deep water ship channel meant that Houston could not handle larger vessels to support the growing commerce.

A revolutionary concept proposed by Tom Ball suggested that the costs of dredging the channel should be shared by the federal government and Houston.

A unanimous vote by the Congressional Rivers and Harbors Committee accepted the idea that became known as The Houston Plan. Later they named Tomball, a nearby Texas city after the brilliant young congressman, Tom Ball.

A campaign launched in 1911 to encourage voters to approve bonds worth $1.25 million.  This money would cover the dredging of the waterway approved by a margin of sixteen to one.

Soon after the Harris County Houston Ship Channel Navigation District (known as the Port Houston Authority today) was formed to issue the bonds.

Despite the enthusiasm of voters, banks and brokers had no interest in accepting the bonds until Jesse H. Jones appeared on the scene and approached the banks in Houston to accept the bonds.

Within 24 hours each bank bought its share. Ultimately this investment has paid dividends for the city, the state and the nation many times over. With this feat, Jesse Jones became a major force in the future of both Houston and the port.

Completion of the Port of Houston

In 1912 work commenced on the deep water channel in conjunction with the progress of other precedent-setting maritime projects such as the Gulf Intracoastal Waterway and the 51 mile-long Panama Canal. On the 7th September 1914, the TEXAS dredge whistled the completion of the channel.

Big celebrations followed by a ceremony were held on November 10th at the Turning Basin to officially open the channel.

The ceremony started with a twenty-one gun salute and President Woodrow Wilson. He fired a cannon via remote control from his office in Washington D.C. to officially mark the Port of Houston open for operations.

The Port of Houston Address: